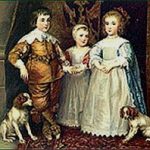 There has been much speculation about the origin of the Cavalier King Charles Spaniel as we know it today. It is possible that the Cavalier developed from a red and white spaniel indigenous to Malta or Italy, which was crossed with a spaniel type from the Far East in the 13th century. Another popular theory is that all spaniels, as the name indicates, originated in Spain, and that the small black truffle-hunting dog was also part of the gene pool. It is a fact, however, that the toy spaniel was refined and established as a breed in England, and there is no doubt that there were inclusions of sporting spaniel types in the bloodlines too. Whatever its origin, it is plain that the Cavalier is a descendent of the “Spaniel Gentle” companion dogs seen in so many pictures of the gentry from the 16th to the 19th century. It was in the reign of King Charles II that the toy spaniel came to prominence in England. The King was so fond of his little dogs that, according to Samuel Pepys’ diary, he neglected the business of the kingdom to play with them. A member of the court, complaining about the general doggy disorder in the King’s apartments, declared with disgust that the King even “suffered them to pup” in his own bedroom. The start of the demise of the original “nosey” King Charles Spaniel started around the early to middle of the 19th century, due to interbreeding of the Toy Spaniel with the short-nosed Pug brought to England by King William of Orange. At about the same time, the English Kennel Club was established, the breeding of dogs became more regulated, and specific breed standards appeared. The King Charles Spaniel’s nose gradually became shortened, his face flattened and his head more domed, but he was still the King Charles Spaniel – and this betwixt and between type still existed well into the first decade of the 20th century. The short-muzzled dog became the type shown at early British shows and at Crufts. Breeders would occasionally find a long-muzzled puppy in a litter and it would be sold as a pet.

The reappearance of the original type of Toy Spaniel must be credited to Mr. Roswell Eldridge, an American who came to England to the Crufts dog show. He was very disappointed not to see any of the “nosey little spaniels he remembered from his boyhood”. He offered a prize of 25 pounds to be awarded at Crufts from 1926 to 1929 for “A Blenheim Spaniel of the Old Type, as shown in the pictures of Charles’ time, long face, no stop, flat skull not inclined to be domed, with a spot in the centre of skull”.

Interest in the Old Type toy spaniel was fostered particularly by Amice Pitt, daughter of the painter, Sir Everett Millais, who remembered the little spaniels depicted by the Old Masters, and took up the challenge. Amice Pitt was a well-known breeder of Chow Chows, and her father had bred Basset Hounds, so she was well-versed in the breeding of dogs. It is quite true to say that, without Amice Pitt, there would be no Cavalier King Charles Spaniel today. In 1926, a breeder of short-faced King Charles Spaniels, Miss Mostyn Walker, had bred a dog called Lord Pindi to a bitch called Ann. In that litter were two puppies that appeared to be throwbacks to the long-faced type of spaniel. These two were Ann’s Son and Wizbang Timothy. Miss Mostyn Walker brought Ann’s Son to a meeting and others attending brought all the old paintings they could find that showed toy spaniels with longer noses. The standard for the breed was based on a composite of Ann’s Son and the dogs in the paintings. Mrs. Katie Eldred, a breeder presently living in British Columbia, was a resident in England at the same time, and attended this historic meeting. A photograph of Ann’s Son appeared on the front of the first leaflet on the breed put out by the Cavalier King Charles Spaniel Club. In 1928, when the Club was founded, the members did not want to give up the name King Charles Spaniel because that was the name of the old original breed. They decided to add the word “Cavalier” and this probably derived from “Cavalier versus Roundheads” rather than from any connection with the “Cavalier King” Charles II. In 1946, the Kennel Club finally granted separate registration from the flat-faced King Charles Spaniel. Prior to this time, early Cavalier breeders added “Cavalier Type” to their registration forms to denote a dog with a longer muzzle. In 1948, Daywell Roger, owned by Amice Pitt’s daughter Jane Bowdler, became the first English Champion. The breed in England has gone from strength to strength, and is very popular with the general public. It is a common sight in town or country to see a little Cavalier trotting happily beside its owner.