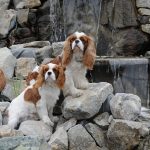 The Cavalier is known to be a sturdy, healthy little dog, but there are genetic tendencies in the breed to develop specific health problems. All dogs of all breeds are subject to inheritable diseases, and the Cavalier is no better or worse in this regard than other breeds.

A genetically caused condition may occur in an occasional individual, even if the breeder has put heart and soul into testing in an effort to provide healthy lines and produce long-lived dogs. Although ethical breeders inform prospective pet owners about these diseases, there should not be too much emphasis put on them. Reputable breeders put much time, money and effort into breeding away from inherited disease in their animals, and most will offer a buyer a one-year guarantee from date of birth against any disabling genetic defect.

We hope that the readers of these articles will keep in mind that the Cavalier is generally speaking a healthy all-purpose dog without any exaggerated features. It has a nicely balanced, well-boned body, is adaptable to town or country living, and has the very best temperament in the canine world. You don’t know what dog love is until you have been loved by a Cavalier!

There is now a DNA test for Dry Eye, Curly Coat & Episodic Falling which should eradicate these problems.

What Is Mitral Valve Disease?

Mitral Valve Disease (MVD) is the most common form of heart disease in dogs. It generally occurs in small to medium size dogs rather than big dogs. And there seems to be a genetic predisposition to the development of disease as some breeds are more susceptible than others. Those breeds who suffer more than average include: Cavalier King Charles Spaniel, Poodle, Schnauzer, Chihuahua, Fox Terrier and Boston Terrier. MVD has also been seen in the Miniature Pinscher, Whippet, Pekingese, Dachshund, Beagle, Papillon, Great Dane and German Shepherd.

It is mostly older dogs who tend to suffer from this disease but some dogs are quite young when it begins to occur.

MVD is a disease affecting the surface of the heart valves. Other names you may hear used to describe MVD are endocardiosis or Valvular Insufficiency. The valves are normally smooth and form a perfect seal when closed. MVD causes the edges to become thickened, lumpy and distorted. The seal is now imperfect and when the ventricle pumps, some of the blood flows backwards into the atrium. This backward flow creates a noise that your veterinary surgeon can hear with a stethoscope. This noise is called a murmur.

Because the heart valves are now leaky, circulation is impaired. For a time your dog’s body may make adjustments to allow it to cope. In fact some dogs manage with a murmur for many years. However, at some point, the disease overrides the adjustments that have been made and the dog can become unwell and show signs of heart failure. MVD may affect your dog’s body in a number of different ways.

What are the signs?

Signs of heart disease can initially be quite mild and so may be difficult to pick up. However, as the disease progresses, the symptoms can become more severe. These signs occur because of fluid build up or because the vital organs are not supplied with the blood, and therefore the oxygen, they require. Signs include:

What does it really mean?

The first signal that a dog might have Mitral Valve Disease is the development of a heart murmur. However, a dog with a heart murmur may live a full life span, depending upon the progression of the disease in that particular dog. Some dogs that have developed heart murmurs at young ages have lived to the average lifespan of that breed. A veterinary while listening to a dog’s heart may hear a heart murmur on the left side. (Please note there are other causes for heart murmurs, to diagnose MVD it will depend upon where the regurgitation is heard) The veterinary will then grade the murmur for severity from Grade 1 (mild) to Grade 6 (severe) and depending upon the grade will advise proper treatment.

Treatment will depend upon the grade of murmur and any clinical signs your dog may be showing. During the early stages of the disease, though a systolic murmur of grade 1-2 is heard there are usually no clinical signs. As the disease progresses, the murmur will become more audible, the dog may become intolerant of exercise, respiratory rate will increase and finally as fluid begins to accumulate in the lungs coughing and laboured breathing develops. Many dogs live for years with a low grade murmur and treatment consists of dietary changes such as low sodium foods. Some Cavalier King Charles Spaniel breeders are recommending that any dog diagnosed with a heart murmur is put on Co-enzyme Q10. This is a natural medication which may be helpful in treating the disease. While no studies have been done with this medication in dogs, there have been considerable studies in humans and the evidence is pointing to great success in treatment of cardiac disease with its use. Co-enzyme Q10 is an over the counter product and can be picked up at virtually any drug store or health food store. As the disease progresses and clinical signs appear such as the coughing and laboured breathing medications such as vasodilators and diuretics will be considered.

What is testing all about?

At present the mode of inheritance for Mitral Valve Disorder in Cavaliers is unknown. It is considered multi-factorial. In other words there is a genetic predisposition for the disease but other unknown factors will go into why one dog is affected and at what age and another dog, even a littermate, is not affected at all. While it is extremely doubtful the disease will ever be eradicated from the Cavalier King Charles Spaniel completely, the hope of breeders is to move the age of onset back as late in life as possible. So many breeders will have their dogs checked annually for evidence of a heart murmur and breed mature dogs that are unaffected. By breeding older Cavaliers who are clear of a murmur until as late as possible in life it is hoped that the age of onset will also move back as well.

Testing is merely a breeder’s tool to try to establish a dog’s health at any point in time. It does not mean that dog may not develop a heart murmur 3 months onwards or that he will not produce puppies with Mitral Valve Disorder.

Heart testing in Cavaliers is an issue that should not be overlooked for any cavalier owner. All cavaliers should be regularly screened by a cardiologist starting at a year old. While a regular veterinary appointment is ok for general health issues it is not sufficient for heart screening. Only a cardiologist will be able to detect problems in the hearts of our cavaliers before they are at a serious level of Mitral Valve Disease progression.

There are three ways that a cardiologist will screen your Cavalier for MVD:

Echocardiogram’s and the use of colour Doppler has allowed Cardiologists the tools needed to obtain very precise information regarding your Cavalier’s heart. On the echocardiogram you are able to clearly see all structures of the heart. The Cardiologist through the colour Doppler is also able to evaluate how the blood is passing through the heart and if there are any abnormalities that are present or may form in the future. For a more detailed look at heart diagnostics please refer to Myra Ehrman’s article that is posted on the Cavalier Club of Canada’s health section of the website.

In upcoming months the Cavalier Club of Canada’s Health & Education Committee will be looking at hosting an annual heart clinic in addition to the study. The purpose of the heart clinic will be to bring in a cardiologist and screen many dogs at one time for Mitral Valve Disease at a reasonable cost. This clinic will be available to breeders and pet owners. More details will be available soon.

How does this syrinx form?

In the normal body there is a flow of fluid which moves steadily around the brain and through the spinal cord. This fluid is called cerebral spinal fluid. A syrinx will form when there is a blockage of this flow. One of the most frequent conditions that will cause this flow interference is when the bone at the back of the head (known as the occipital bone) is too small. This is called a “Chiari Malformation“. This malformed bone changes the shape of the skull and the brain can be compromised for space. The brain may push through the hole at the base of the skull (known as the foramen magnum). A brain that extends beyond the foreamen magnum will obstuct this hole.This results in blocking of the normal flow of cerebral spinal fluid and can create a syrinx the spinal cord.

What are the signs and symptoms?

A dog affected with Syringomyelia will scratch at the air around the neck area (air or phantom scratching) without connecting with the skin. This is most often observed when the dog is walking on a lead. The dog will continue these behaviors after ear or skin infections have been ruled out by a qualified veterinarian. The dog may at times cry out or yelp with no apparent reason. The dog may also show weakness in the front or rear legs. The symptoms can be observed intermittently and may worsen over the course of a few months or years. An affected dog may also show no visible symptoms and go undetected.

How is Syringomyelia diagnosed?

No one can simply look at a dog and diagnose it. At this time there is no blood test for syringomyelia. An xray cannot show the tissue and fluid around the spine or brain. An MRI is the definitive diagnostic tool for determining if a dog has Syringomelia. An MRI can show individual transverse photos (similar to slicing a loaf of bread) of the spine so a syrinx or anomalies at the foramen magum can be easily identified.

What is the treatment?

The primary intention of medical management is to reduce the dog’s pain. Medication options include treatment with NSAIDs (Non steroidal anti-inflammatory drugs). Diuretics that reduce the production of cerebral spinal fluid may be prescibed. Anticonvulsant therapy may be considered as it has been used successfully for pain mangement in affected dogs. Medical management will treat the pain associated with syringmyelia. However, it will not treat the underlying cause.

Surgical intervention can be done. It is a complex procedure by a neurologist to alleviate the the crowding of the brain. This can be done by either removing some or all of the occipital bone. A shunt procedure may also be indicated.

Why do so many Cavaliers have this disease?

Syringomyelia is also a human disorder that is increasing in identification.

What is being done to help Cavaliers?

Many many Cavaliers live long and healthy lives. That is the wish of everyone who has ever loved a Cavalier. At this time there is no guarantee that a Cavalier will not develop the disease. Due to the genetic incident of this disease it is advisable to avoid dogs with closely related pedigrees. Strategies to attempt to reduce the incidence of syringomelia continue to be developed.