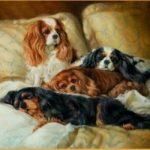 1.0 Origin and Purpose
The Cavalier King Charles Spaniel is a much-admired Royal Spaniel. Descended from the Toy Spaniels of Europe, the breed was variously known as the “comforter” or “Spaniel Gentle” and first appeared in the courts of England with the reign of Queen Mary I. The breed, which appears in manu of the great paintings of the Masters, received its name from King Charles II. It become virtually extinct in the Victorian and Edwardian eras, as short-nosed breeds took the fore. By 1923, the King Charles Spaniel (today’s English Toy) with its flat nose had replaced the old – type Toy Spaniel. In 1926, the incentive for the revitalization of the old-type Toy Spaniel was provided by Mr. Roswell Eldridge, an American who offered prizes of 25 pounds for the Best Dog and Best Bitch of this type at Crufts. The name Cavalier was added when the Cavalier King Charles Spaniel Club was founded in 1928 to further develop the breed. It was not until 1945 that the Kennel Club (England) granted separate registration from the King Charles. The popularity of these companion dogs has spread around the world and in 1957 the breed gained Canadian Kennel Club recognition.

3.0 Temperament
Fearless and sporting in character, yet at the same time, gentle and affectionate.

Blenheim: Bright chestnut red markings well broken up on a pearly white ground. The red on the head must extend around the eyes as well as down over the ears. A pure white muzzle is preferred. There must be a distinct white blaze between the eyes. Between the ears may be the lozenge or spot, unique to the Blenheim which is highly desirable, but not essential, characteristic.

Tricolour: Jet black markings well broken up on a pearly white ground. The black on the head must extend around the eyes as well as down over the ears. There must be a distinct white blaze between the eyes. A pure white muzzle is preferred. Rich tan markings appear over the eyes, on cheeks, inside ears, under the tail and around the vent. Tan should appear inside the legs where it is adjacent to black.

Head: Almost flat between the ears, without dome. Stop moderate. Length from base of stop to tip of nose about 1 1/2 inches (4 cm). Nostrils should be well developed and the pigment black. Lack of stop or too deep a stop are to be penalized equally.

Muzzle: Tapering slightly to the nose. Lips well covering and well-cushioned, but not hound-like. There should be cushioning beneath the eyes which contributes to the sweet, gentle expression characteristic of the breed.

Mouth: Teeth strong and even, meeting in a scissors bite. Level and undershot mouths are to be discouraged. However, a slightly undershot bite in an otherwise well-balanced head with the correct sweet expression should not be penalized in favour of a scissors or level bite with a plain head or hard expression.

Eyes: Should be large, round and set well apart. Colour should be warm dark brown, giving a lustrous, limpid look. Eye rims should be dark. Small, light or bulging eyes, or a white ring surrounding the iris, are very undesirable.

Ears: Set high but not close to the top of the head. Leather long with plenty of silky feathering, and wide enough so that when the dog is alert the ears fan slightly forward to frame the face.

14.0 Faults
Any departure from the foregoing points should be considered a fault, and the seriousness with which the fault should be regarded should be in proportion to its degree: